Going into Debt to Be Internet Famous

Home » The Buzz » Going into Debt to Be Internet Famous 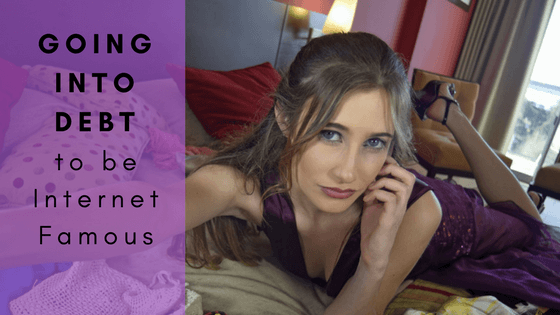 How social media is making your desire to keep up with the Joneses worse.

Keeping up with the Joneses is nothing new, but social media certainly isn’t helping people’s desire to outdo everyone else. These days the desire to be “internet famous” is rampant, and people waste a lot of time, effort (and money) to try and achieve it. But as we see from one woman’s story on Good Morning America last week, the cost of becoming internet famous is often higher than most people can afford.

Millennial Lissette Calveiro (age 26) moved to New York to find the Sex and the City Lifestyle. Fabulous clothes, name brand shoes, expensive restaurants and the hottest bars in town – the perfect New York social life that many women aspire to achieve. But like many others, Lisette learned that living like Carrie isn’t easy unless you also happen to pull in her paychecks from Vogue. Trying to live that lifestyle on an intern’s pittance pay is a fast way to go into debt.

Lissette isn’t alone. Millions of people – Millennials in particular – pin their hopes on becoming internet famous. They look at the Jake Pauls and Dudesons and Let’s Players and assume it’s easy to replicate. What they soon realize is that becoming Internet famous is as hard (if not harder) than moving to L.A. to get your big break.

So, with that in mind, we’ve come up with a list of the Top 5 stupid ways you can waste money trying to become Internet famous…

There are tons of services that offer to instantly get you more followers if you pay them a fee. This is a waste of your money and, more often than not, it doesn’t get you the results you want. The followers you get from these types of servicers are 99% fake. They’re not real people with real accounts. They’re bots. So, other than boosting your follower number, they really don’t “count.”

#2: Getting camera/video equipment that you can’t afford

Unless you’re a professional snowboarder with a GoPro sponsorship, you probably can’t afford all the gear. There’s nothing wrong with getting cameras, selfie sticks and other accessories to capture your memories in the best possible light. But if you’re buying every GoPro accessory and better camera equipment just to make your Instagram feed cleaner, you’re going into debt for a pretty dumb reason.

This also includes paying for platforms like Photoshop so you can retouch your photos to make yourself look better. Without a doubt, photoshop retouching can make you look like a goddess, but only if you know how to use it. If you’re not a designer, you can’t just pay Adobe for their monthly license and assume all your images will be perfect. You have to know how to use it, and if you don’t, you’re just wasting your money.

Paying for ads or things like boosted content on Facebook will get you more eyeballs to your content, but what’s the return? Companies boost content because they’ll get a return on the investment – people will sign up for their service or buy one of their products. But what’s the return on boosting something that doesn’t involve a sellable product. There’s no value to those additional views.

So, unless you have a product or service you’re selling – or at the very least some sort of ad revenue generation on your blog – don’t waste money boosting your content to get more views. Engagement is great, but you can’t pay your light bill with it.

#4: Living beyond your means for better tags

This was Lissette’s biggest mistake that drove her into debt. She wanted to be able to tag the best fashions and most exotic locations in her posts. This is where the old adage of keeping up with the Joneses really comes in. They take a trip to Madrid, so you need to take a trip to Paris or Milan. They buy a Mercedes Benz, so you buy a Mercedes.

The problem with this idea is that many of the people you’re trying to outdo are probably also in debt. For all you know, the Joneses declared bankruptcy right after they got back from St. Croix. So, following in their footsteps is a good way to end up in financial distress.

And keep in mind, even many celebrities are living beyond their means. That’s why you hear those horror stories about the IRS going after a celebrity or a repossession of some rapper’s Bentley. Extravagance is expensive. And unless you’re earning six figures, you probably can’t afford it.

And even in Lisette’s case, her Joneses were fictional characters from Sex and the City. It’s easy to live fabulous when your life is fictionally scripted. But all that fabulousity comes with a price tag. And if you’re putting it on credit, instead of gaining followers you’re only going to gain high interest rate credit card debt.

This is one that you hear about a lot with internet personalities who are trying to make it big. It’s a leading cause of most of the moocher stories that you see on Dr. Phil. “Well I would get a job, but I can’t afford to take time away from my audience.”

The truth is that time does have something to do with Internet fame. The more you film, the more time your followers have to watch. The more content you have, the more likely you are to record something that goes viral. But if’ you’re filming 24/7 just to appease your 1,000 YouTube subscribers (most of whom are trolls) then you have a time management issue.

An offshoot of that last bit of advice is that you don’t want to do anything to become Internet famous that would hurt your chances of landing gainful employment. If the Internet fame doesn’t pan out, you’re eventually going to need another career path. And you don’t want anything you did for online fame to get in your way. So, anything scandalous, pornographic, racist, bigoted or something that just makes you look incredibly stupid is probably best avoided or kept private. Because while photos of your derriere might get you a grand Instagram following and a robust Cam Girl business, you’ll probably have a hard time getting a regular 9-to-5 after that – just ask Ona Artist.