How Much Does Thanksgiving Cost at Your House?

Home » The Buzz » How Much Does Thanksgiving Cost at Your House?

Turkey Day is almost here and by the time it rolls in, Americans would’ve already spent over $1.05 billion and that’s just on turkeys — according to data from the personal finance comparison website finder.com. This means that, an additional amount will be spent on trimmings, beverages, décor and all that good stuff. And so it isn’t surprising that November is recorded as one of the most expensive months for credit card holders.

Michelle Hutchison, Money Expert at finder.com says. “Thanksgiving is a special day for enjoying time with friends and family but is also one of the most expensive days of the year for many families, especially if you’re the one hosting.”

But, do all Americans eat turkey on Turkey Day?

Eighty-five percent of Americans do — that’s 276 million as per estimates by the National Turkey Federation.

And if you’re wondering how many turkeys can possibly amount to over a $1Billion?  Animal lovers, skip this part 🙂

How much does one turkey cost?

According to Finder.com a 16 pound turkey will cost about $23.44 this month. They offer these tips on choosing the right turkey…

While the above will provide some savings here and there, Hutchison says the key to saving is the dreaded B word—Budget—not only creating but sticking to it.

“What is really going to save you money in the long-term is setting a budget ahead of time,” Hutchison says. “This can help you avoid impulsive purchases, which is a serious issue for most credit cardholders. In fact, a finder.com commissioned survey of 6,838 American adults found the majority of American credit cardholders – 64 percent or a total of 158.6 million people – make about seven unplanned purchases on average with their credit cards each month.”

“Creating a budget can also help you avoid having to use your credit card and accruing interest if you don’t pay it off in time. If you do find yourself using your credit card more than usual and struggle to pay it off, it’s worth considering a balance transfer where you can transfer your debt to another card with low or no interest for a certain period of time.” 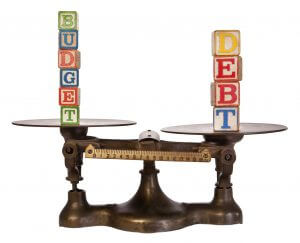 Credit card debt now topples over $729 billion and the average household owes $15,675 in credit. While the holidays are often synonymous with spending, no one wants to head into the New Year with a debt hangover. According to The Balance, “Credit card debt is the portion of your credit card balance that you have not paid off. It’s also considered revolving debt. This type of debt usually involves accounts that allow you to carry a debit balance and have predetermined credit limits, variable interest rates, and payments that are calculated as a percentage of the unpaid balance.”

So, if you want to usher in 2017 with a clean slate, proactively take measures against wracking up debt during the holidays. A good time and place to start is now.

“Don’t be a turkey this Thanksgiving,” Hutchison says. “Plan ahead and don’t let your spending get out of control or the holidays could end up costing a lot more than necessary.”

Happy Thanksgiving and Happy Holidays! May you and your wallet remain healthy this holiday season.