Right now – someplace, somewhere, women owned businesses are popping up in the nation, creating jobs not only for those women but for millions of other Americans, too. A trend experts say is necessary to boost a wobbly economy. 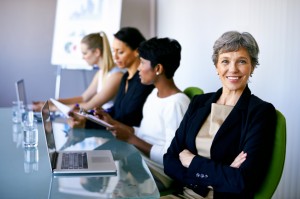 Up until the 1970’s a woman’s place was largely thought to be in the home rearing children and keeping the household up. During that time there were only 30.3 million women in the labor force performing jobs in the field of teaching, secretarial, and administrative.

Then at the turn of the century more and more women entered the workforce, until between 2006 and 2010 that number ballooned to 72.7 million women in the workforce. Today women are also heading major corporations in areas such as engineering and tech. Currently women hold 23 (4.6%) of CEO positions at S&P 500 companies. Albeit still a small number, but it is still a huge stride forward and very encouraging.

Last year women opened roughly 887 new firms per day. That’s according to the 2015 State of Women-Owned Businesses Report, commissioned by American Express OPEN. In fact the data also shows 30 percent of the businesses in the U.S. are currently owned by a woman. According to the data there are 9.4 million enterprises owned by women in the U.S. These businesses generate $1.5 trillion in total revenue and employ 7.9 million workers especially in the health care and social assistance, educational services, and administrative support and waste management services.

Women are making remarkable contributions to the economic landscape of the country. Nationally, the number of women-owned businesses has increased 74 percent since 1997 and has added nearly 1 million more jobs to the economy.
The fastest growth in the number of women owned firms between 1997 and 2015 occurs in States like Georgia, Texas, North Carolina, North Dakota and New York.

The States with the lowest growth rates of women-owned businesses since 1997 are Alaska, West Virginia, Iowa, Kansas and Maine.

So how does Florida stack up?

According to the data, women in Florida own an estimated 616,200 businesses, employing 484,700 workers and generating roughly $80,986,500 in revenue as per the fifth annual State of Women-Owned Businesses Report, commissioned by American Express OPEN.

“Women-owned businesses are key contributors to the post-recession recovery,” Lisette Bernstein, Vice President at American Express OPEN says. “With this report, we hope to draw attention to the growing diversity of women-owned enterprises and inspire even more women entrepreneurs to reach their full potential.”

Want to reach your full potential? Here are some things to consider if you’ve always wanted to start your own business.

1. The minute an idea for a business pops into your head, start doing your research
2. Devise a well-thought out plan, business model and marketing approach before you make anything official
3. Be open to ideas and constructive criticism about your plan
4. Be sure to know where funding for your business will be coming from, whether you will have to dip into your savings (although you should avoid using your reserves) or whether you will borrow. If you plan to borrow, a bank loan is a good place to start if you qualify. You may also take out a Small Business Administration Loan (SBA). These are loans guaranteed by the federal government and are viable options, especially if you do not qualify for a regular business loan.
5. Make sure you address all legal requirements. Define whether your business will be a corporation or a limited liability company, LLC. Doing so, among other things, will help determine how you file taxes.
6. Seek the legal counsel of an attorney and an accountant
7. Be sure to create a buzz with your brand. Branding plays a major role in developing a successful company — it’s what makes you stand out from your competition. A nicely designed logo, business cards and stationary
8. Be confident and believe in your business