Moms in the Workforce: How to balance work, home and the kids

Home » The Buzz » Lifestyle » Moms in the Workforce: How to balance work, home and the kids 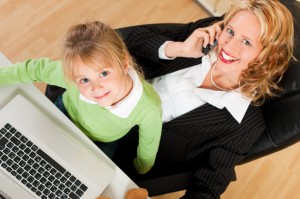 Juggling, work, bills and the kids can be daunting. Finding the right balance between work life and family life can be challenging especially for moms with small children. Jennifer Carroll – a mother, the first female and first black elected lieutenant governor of Florida and a retired U.S. Navy lieutenant commander – says with the right balance you can do it all.

“The perfect worker, wife and mother – these are ‘the big three’ roles that matter most to women, but you really want to make sure your children don’t get lost in this juggling,” Carroll says. “Your husband and your coworkers are adults; children, on the other hand, are vulnerable.”

Since early times a woman’s place was considered to be in the home – being a wife and raising a family. Over the last few years, barriers keeping women in the workforce has been broken and more women are holding 9 to 5 jobs much the same as their male counterparts.

While women are making tremendous strides in the workforce, Carroll says it is important that the children don’t get lost in the hustle and bustle. For the women who are concerned about their role as mom, Carroll offers these five suggestions:

1.       Provide a listening ear always: “Listen to children when they have something to talk about. They may feel too embarrassed to talk about something that happened to them; they may feel like it’s their fault. Be sensitive to their words and behavior, and be open to what they have to say.”

2.       Designate at least one day of the week as family day. Carroll says while advancing her career in the Navy, she often spent several months away from her family. Later in her career, including as Chairwoman of Space Florida and lieutenant governor, time was also a precious commodity, but she always made sure she had it for her three children. Sundays are “Football Sunday” for everyone in her household including her husband.

3.      Be the role model you’d want them to emulate. “Children have sensitive consistency detectors; they are quick to realize the disconnection between what parents say and what they do. There’s something to be said for people who are able to follow their own advice. Many don’t.”

4.      Your family is family for life, stress the importance of loyalty. Carroll says while your career may be important, the bonds that you forge at work will never be as strong as those forged within the family. “Children are hungry to know they are secure with love and loyalty, so don’t hesitate in reinforcing this message,” Carroll says. “When you have a secure family foundation, you can approach work with greater strength and confidence.

5.    It’s important to engage your kids.  Keep kids in the loop of what you’re doing, and be sure talk to them about what they’re doing. Make sure that kids have a balance between studies and extracurricular activities, such as sports, study groups, a job or other productive behavior.