Which travel card perk is the most popular?

Home » The Buzz » Which travel card perk is the most popular? 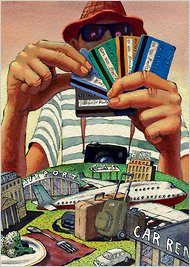 Free checked bags are the top travel benefit offered by credit cards, according to a random telephone poll of 1,005 consumers commissioned by CreditCards.com.

The baggage fees can outweigh the annual fee for a credit card, especially if you travel with family. Let’s say you, your spouse and two kids take a vacation and each member has a suitcase they want to check. That’s potentially $100 in baggage fees.

But if you buy that ticket with a Gold Delta SkyMiles credit card from American Express, you and up to nine people traveling on the same reservation get a free checked bag. The card’s annual fee is $95, waived the first year, so one trip can more than pay for the card. It also offers priority boarding and 20 percent off in-flight purchases of food, drinks and movies.

Similar savings are available with the Citi Platinum Select AAdvantage World MasterCard. For an annual fee of $95, waived the first year, you and up to four traveling companions get a free checked bag each. Plus you get priority boarding, 25 percent off certain in-flight purchases and $100 a year in flight discounts.

More general bank-issued travel reward cards lack the boarding and baggage perks, which the airlines control, but their rewards for free travel can be redeemed at a much wider variety of airlines and other travel providers. Most travel-rewards cards, issued with or without an airline’s participation, include rental car insurance and travel-accident insurance.

Those other perks are actually more valuable to certain demographics. The survey showed adults 34 and under and people making less than $50,000 a year are more likely to prefer rental-car or travel insurance.

Overall, there are signs of a widening disaffection with all kinds of rewards cards. In a recent Mercator survey, the number of cardholders who said they participated in a credit- or charge-card reward program in 2013 fell to 68 percent, down from 76 percent a year earlier.

Yet travel-industry loyalty programs are still growing, according to LoyaltyOne Consulting, which works with travel and retail companies on rewards programs. A study by the company last year showed that airline programs constituted the largest segment of the travel and hospitality loyalty industry, with a combined 371 million members in 2012, 14 percent more than two years earlier.

Nevertheless, Jeff Berry, senior director of research and development for LoyaltyOne, says there’s an emerging division between people who want “aspirational” rewards — such as an international trip or a big-screen TV — and those who prefer “utility” rewards, such as cash-back or grocery discounts.

Those “utility” reward cards that offer immediate financial gain have taken off since around the recession in 2008-2009, Berry says. In addition, travel rewards tend to be less immediate, and complicated redemption rules and changes to award-redemption levels could drive people to other kinds of rewards, he says.

“There is a level of complexity that is built into travel awards,” he says. “That is a perceived risk factor for a consumer: ‘I don’t know what my points will be worth three years from now, so I’ll get cash.’ ”
Karen Augustine, manager of primary data services for Mercator Advisory Group, says more people are finding credit cards with non-travel rewards that might be more relevant to them. For instance, retail cards are surging in popularity, as more department-store shoppers are responding positively to the familiar checkout clerk question, “Would you like to save 10 percent on your purchase today?”

“Retail-sponsored cards are luring people that may not have otherwise applied for a credit card or used a credit card, because of the rewards they are offering,” Augustine says. “Some people say they think it’s more valuable.”

The survey was conducted Jan. 24-26, 2014, by GfK Custom Research North America on behalf of CreditCards.com, via random digit dialing phone interviews with 1,005 interview subjects. Interviewees were approximately split between males and females ages 18 and over, with 544 females and 461 males surveyed. The raw data was then weighted by a custom designed computer program that automatically developed a weighting factor for each respondent, employing five variables: age, sex, education, race and geographic region. Approximately three quarters of the interviewees were reached on land lines and the rest on cellphones. The total margin of error on weighted data for the full sample is plus or minus 3 percentage points at the 95 percent confidence level.

Tony Mecia is a freelance business writer based in Charlotte, N.C. In addition to writing Cashing In and articles for CreditCards.com, Tony writes for a variety of trade and general-interest publications and companies. As a reporter and editor with the Charlotte Observer, he won “Best in Business” awards from the Society of American Business Editors and Writers for his coverage of the airline and textile industries.